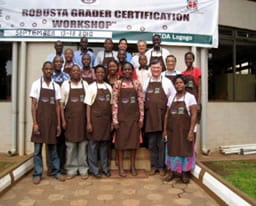 This increase in price differentials between Arabica and Robusta coffees during the past three years strongly suggests that programs aimed at establishing benchmarks for top Arabica qualities, such as the Q Coffee System established by CQI and the Cup of Excellence program developed by ACE, have enjoyed considerable success and have given the Arabica growers a tremendous push toward sustainable economic viability.  This has led to improved qualities across the entire Arabica production chain, pulled by the success of the Central American coffee producers, which other Arabica producing countries have sought to emulate.  The other significant impact from these activities has been a general heightening of the awareness of the importance of quality among coffee consumers, as evidenced by the movement of major foodservice chains, such as McDonalds and Burger King to high quality coffee programs and by the continued expansion of the specialty coffee industry in new markets in Asia and Eastern Europe.  The unintended consequence of the success of this effort has left the Robusta producers “in the lurch,” a vulnerable and unsupportable position as indicated by the disparity in price levels between Arabica and Robusta coffees.

“Standards – Education – Ethics” have been the driving force behind the success of the Arabica producers’ efforts.  It is now time to apply this same formula for success to the Robusta coffee market.  As a starting point, there is a critical need to address quality issues across a broad range of processing standards for Robusta coffees.  The establishment of a bona fide standard for “Fine Robusta Coffees” to meet the marketplace requirements for this category of coffee will build quality awareness among all Robusta producers.  More important, the establishment of a reliable Robusta supply chain that makes available regular and consistent supplies of high quality Robusta coffees will encourage roasters to offer this category of coffee to their consumers, thereby creating the consumer base needed to make the Robusta market economically viable.  This connectivity is particularly important in Asia and Eastern Europe where Robusta type coffees are often in the greatest demand.

For the past 10 years during the time of coffee oversupply, USAID and other international governmental agencies invested heavily in quality and processing improvements for washed Arabica coffees.  By enhancing the value-add attributes of the top Arabica qualities, the marketing capacity and connectivity for these coffees were measurably strengthened, particularly the premium prices paid by consumers as reflected in the 2010 price levels.  Projects like the RATES/Chemonics program in East Africa that supported the East Africa Fine Coffees Association (EAFCA), and the CADR/Coffee Quality Institute program in Central America that supported CQI are good examples of the success of increasing producer incomes through quality improvement programs.  A similar quality improvement program is desperately needed for Robusta producers.

Recognizing this need, USAID, through the LEAD program in Uganda (Susan Corning) supported by the COMPETE program in East Africa (Steve Walls), took the first and essential step.  Beginning in 2009, four Robusta Fine Coffee Workshops were held in Kampala (August 2009, March 2010, and June 2010) and Ghana (November 2009) with the primary objective of establishing high quality standards for Robusta coffees that would be universally recognized and accepted by the coffee trade.  This work was led by the Coffee Quality Institute (CQI) and was based on the lessons learned from building the Q Coffee System in Arabica producing countries.  The program also received invaluable support from the Uganda Coffee Development Authority (Henry Ngabirano).

Sixty-three (63) coffee professionals representing eighteen (18) different countries, including Brazil, Colombia, India, Indonesia, and Mexico participated in one or all of the four workshops over the 24 month long program, totaling over 3,500 man-hours of effort.  Samples from all of the major Robusta producing countries were cupped, graded and evaluated.  And seven different testing methodologies for evaluating Robusta cuppers were studied, evaluated, and perfected.

The success of the Fine Robusta Coffee Workshops cannot be overstated.  It clearly identified the potential for huge growth in the market place for this category of coffee; growth based on quality not price.  The success also clearly identified the roadblock to improved Robusta prices:  DEFECTS.  All of the coffees cupped during the Workshops had been cleaned and graded so that the defect counts were comparable to those for specialty Arabica grades, and consequently the flavor improvements in the Robusta coffees were striking.  As a by-product of these Workshops, the coffee industry now has a set of training materials to use in a systematic approach for quality improvement in the Robusta coffee supply chain.  So where do we go from here?

The next major step is to establish a “Center for Robusta Excellence” whose purpose is twofold.  First, to create the institutional structure for training and certifying “R” graders who can consistently identify and evaluate “fine” quality Robusta coffees.  This quality certification then becomes the basis for establishing a differentiated market for high quality (“Fine”) Robusta coffees in much the same way that a differentiated market was developed for (“Specialty”) Arabica coffees.  And second, to provide the research infrastructure need to identify and understand the over-riding factors that create high quality Robusta coffees, such as plant varietals, soil conditions, micro climates, husbandry, and processing methods.  Fortunately, UCDA with the leadership of Henry Ngabirano, is well on their way to establishing this entity.

(Ted Lingle is the Executive Director of the Coffee Quality Institute, a non-profit foundation whose mission is “to improve the quality of coffee and the lives of the people who produce it.”)

Is the Best Coffee 100% Arabica?
Scroll to top