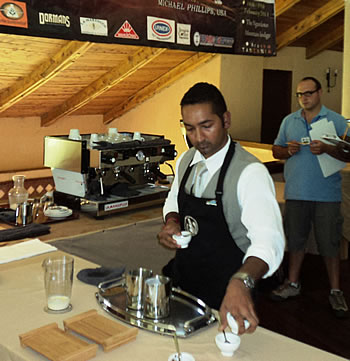 The Eastern African Fine Coffees Association (EAFCA) announces the completion of the 2nd Africa Barista Challenge ABC that took place in Arusha, Tanzania from 17th – 19th February 2011. Ishan Natalie, the 2009 & 2010 National champion from South Africa emerged the winner with 51% score, followed closely by Catherine Maringi from Kenya who took second place with 50%. In third place was Mark Okutta from Uganda and in 4th and 5th place were Syriah Mwanza from Zambia and Asmah Juma from Tanzania.

This competition was the second of its kind in Africa and a major highlight of the 8th African Fine Coffee Conference & Exhibition. The event was organised by the Eastern African Fine Coffees Association Secretariat (EAFCA) in collaboration with the Coffee Quality Institute (CQI – USA) The main equipment and cash sponsor was La Marzocco, Italy.

Contestants were trained and judged by a panel of local and international experts on basic coffee cupping, PowerPoint presentations on the coffee industry in their specific countries, espresso tasting, the WBC Competition and workshop and a fun coffee trivia game show:

All the judges and the WBC champion guided the baristas one by one through the activities they had participated in and advised them on the areas they needed to uphold or improve before the WBC in June.

The main sponsor La Marzocco MD Mr. Kent Bakke also had the opportunity to address the delegates and reinforced his organization’s continued support to EAFCA and the Barista movement in Africa for the next 5 years.

The categories of the competition were weighted according to importance and relevance. The comprehensive nature of the ABC competition was applauded by the WBC Champion, sponsors and audience, and it is hoped to enhance team work among the African representatives and ensure deeper knowledge and exposure, leading to better performance at the World Barista Championships scheduled to take place in June 2-5, 2011 in Bogotá, Colombia.

“The lesson I took away from this trip is that even though the African barista community is under served in terms of resources to learn and train with, the passion is there, the industry at retail is just young still. I am still baffled as to why the Americas have not caught on to how good of an idea events like this are… The Nordic, Euro and African barista communities all have something now… time to catch up!”
Michael Phillips|Director of Education|World Barista Champion 2010-Intelligentsia Coffee & Tea, Inc.

“Congrats on an inspiring and well planned out event. One all interested in quality coffees should participate in. We at La Marzocco are proud to be a part in fact”
Guido Bernardinelli, Managing Director La Marzocco srl

“The Coffee Quality Institute (CQI) has been involved with the Africa Barista Championship and National Africa barista events for a number of years. The barista movement has an important impact in Africa to increase local consumption and awareness of coffee quality to the world, especially with the tourism industry. The ABC is the culmination of this annually and brings the coffee world closer to knowing Africa coffee qualities, which ultimately leads to higher prices and income to the producers”. David Roche, CQI Technical Director

“I feel that EAFCA should bring all national bodies or organizing committees onto the ABC board, to be members of the organizing team and allow local judges to participate as a way of improving their capacity and preparation for WBC certification”
Edmund Kananura, Senior Quality Controller, Uganda Coffee Development Authority

“EAFCA is proud of having held the 2nd Africa Barista Challenge in Arusha, Tanzania. The ABC will enable EAFCA member countries enhance barista skills and promote appreciation of domestic coffee consumption. Barista skills in Africa are still low and EAFCA plans to offer training and promote awareness and competition in these skills. Building on the success of the 2nd ABC Championship, EAFCA will target to increase the number of countries participating from 6 to 11 over the coming years and put in place a structured procedure to consistently improve Barista skills in the African Region”.
Samuel Kamau, Ag. Executive Director EAFCA

ZAMBIA’S BEST COFFEES SHINE
Scroll to top
We use cookies to ensure that we give you the best experience on our website. If you continue to use this site we will assume that you are happy with it.Ok