Speciality coffees from the rooftop of Africa

SPECIAL COFFEES from
SPECIAL PEOPLE and
A SPECIAL PLACE

Farmers from several independent co-operatives in Rwanda have invested heavily to bring the best of their crop to the market. Now their new joint-venture, Misozi, is proud to offer you the fruits of their labour, and the prospect of a long term, mutually satisfying partnership.

The Misozi co-operatives are spread across the lush mountains of Rwanda – on the very rooftop of Africa, the watershed between the two great rivers, the Nile and the Congo, from the natural forests of the south to the volcanoes of the north. Each place and people have their own character and beauty, and from each co-operative comes a distinctive coffee of the highest quality.

Constance from Abakundakawa coop Rushashi washing station; “Since I was a child, coffee has meant a lot to me – income for food, clothes, school fees…Early on my parents gave me a few trees to look after as a kind of inheritance…we invested a lot in our trees in terms of time and mulching…but we were getting very low prices from the middlemen. So in 1990 we formed an association, to combine our harvest. Later when we heard about a coffee washing station near Kigali, one of us went to visit. That was how the idea was hatched – and in 2003 we started with our own mini washing station. It was successful, and we have extended it to the big washing station we have today. We now get much better prices.”

Fellow farmer Spéciose Baziruwiha adds, “Coffee for us is more than just a crop. It is our main income, our wealth and security. Now we’re selling our coffee directly, other farmers are very keen to join the co-operative.”

Charles Habinshuti, the former president of Abakundakawa, a Misozi founder-member co-operative under organic conversion: “Our coffee comes from the highest altitude, we give it the best farm practices and we have constant rainfall. That’s what makes it distinctive”

Misozi is the Kinyarwanda word for “hills”, where the coffee comes from. Misozi is the farmers’ own fair-trade certified export and marketing company. All the member co-operatives are also fair-trade certified and constitute its shareholders. Misozi’s mission is to identify and foster links with discerning market partners. Our objective is to establish long term partnerships based on mutual commitment and relationship.

Our offer is a range of fully washed arabica coffees from individual co-operatives. We invite buyers to get to know the coffees, the people and the places. We look forward to each co-operative having their own special and direct relationships with coffee buyers.

We offer a full, professional service:

After the deep trauma and tragedy of recent years, Rwanda’s coffee farmers today have their eyes firmly fixed on the future. They are coming together from their different backgrounds to form co-operatives to build better livelihoods for their families and their communities.

Misozi coffees are grown on the slopes of high altitude mountains ranging from 1500 to 2200 metres above sea level with an ambient temperature varying from 17 to 23 degrees centigrade. The climate, altitude and volcanic soils allow the predominantly Bourbon-variety coffee cherries to mature slowly, giving a good sized bean that is rich in flavour and aroma.

Ripe cherries are picked in the early hours of the morning. They are then immediately delivered to the washing station where they are again hand sorted. The best quality cherries are expertly pulped, fermented, graded and washed.

After washing, the beans are spread on raised, ventilated drying tables. They are protected both from rain and excessive sunlight throughout the drying process, allowing the coffee to develop its full taste characteristics slowly and naturally.

When dry, the coffee parchment is carefully bagged in well-ventilated stores before being transported to Kigali for milling and grading according to buyers’ requirements. It is shipped to its final destination from the port of Mombasa in Kenya.

Personalities of the member co-operatives of Misozi:

On the hills overlooking the shores of Lake Kivu in a region of abundant rains located in the western province, Kopakama produces some of the best coffees in the country. This cooperative is fair-trade certified with membership of 766 small holder farmers. With an average of 300 trees per farmer, Kopakama has a washing station with a potential of producing u to190MT of fully washed exportable green coffee depending on the rains and the season. Of late its highest production was about 43MT for the last year five years only since it went operational. Kopakama cooperative is known for its women active role in the administration of the coop. Special on its board is a catholic priest by the names of Fr. Murenzi Eugene who advises the Coop on its activity planning and executions. This cooperative is very kin on developing very strong and mutual relationship with its clients.

Found in the shadows of the northern volcanoes of the Northern Province the famous home of Mountain Gorillas, The farmers say “Our coffees grow up in the sky.” The coffee is in conversion to organic and is known for its exceptional cup profile. Fair-trade certified, the cooperative boasts of a membership of 1339 small holder farmers and has the capacity of producing up to 100MT of fine exportable fully washed coffee. Of late its been making an average of 54MT a year three years since operation. Offering one of the best bean in Rwanda, Rushashi cooperative is best known for pioneering the organic conversion programme in the country that is expected to have their first crop on the market by the year 2017. Also known is the Women Special the carefully selected and processed coffee beans by a special group of women members of the cooperative. This special coffee lot fetches special premiums with extra incomes that support these women in welfare activities that support their families. Its this excellent management and quality control that earned them a prize of performance from the Cup of excellence.

Situated on the slopes overlooking the banks of Lake Mugesera, found in the Eastern Province. The cooperative takes 30 to 45 minutes drive from Kigali the capital of Rwanda. This cooperative is fair trade certified an has a membership of 500 small holder coffee farmers. On average each member has about 485 trees of coffee to harvest every season however more is expected as seedlings are planted every year. The cooperative started in the year 2004 and went operational in march 2005 with its first production of only 33bags of good quality exportable coffee. With a potential of producing up to 72MT they have managed realising 72MT of green exportable quality this year . The cooperative has come up with extra productive activities to engage its members during off production season to diversify the income for its members. The farmers see a blight future where they will realise the income per capita set by the government vision 2020 in its poverty reduction strategy.

By the Akagera River (the source of the Nile), with the spectacular Rusumo falls and close to the border with Tanzania 116km from Kigali the capital , the Sakara hills in the Eastern Province provide the home to IAKB bean. Well balanced body and a range of flavours the IAKB coffees derive their quality from the silt residues of Nyabalongo river a tributary to the Akagera the great source of the Nile. Born in 1999 as an association of small holder coffee farmers they matriculated into a cooperative in the year 2005 and saw their first production in April the same year. IAKB enjoys a gender balanced membership of 1161 small holder farmers. With a potential of producing up 36MT of fine exportable quality fully washed coffees IAKB hit its record mark of 54MT all of fine exportable quality last year. Fair-trade certified since 2006, IAKB has continued to demonstrate a steady rise in trend both in quality and quantity ever since it went operational early 2005. Next year IAKB is launching a special prepared coffee by a special group of its small farmers that will be packed in special symbolic Rwandan basket to be marketed as the basket coffee.

Their name means “The Coffee Masters” This cooperative was born out of an association of small holder farmers in Ngoma district in early 2006 and commenced their first production in march the same year. With a potential capacity of producing up to 54MT of exportable fully washed green coffee, last year saw the cooperative mark its first production of about 14MT exported in fine quality fair-trade certified fully washed coffee. Every year they export around 40MT fine exportable fully washed green coffee. Fair-trade certified since 2006 year this cooperative is located 18Km from the main road joining the capital to the Tanzanian boarder in Ngoma district found in the Eastern province of Rwanda . With a membership of 600 members. Their crop enjoys very rich soils and rains well spread on the undulating hills overlooking the spectacular four lakes found in the Akagera National Park. More coffee is expected to increase as more trees are planted by members every year.

About 180KM from the capital Kigali and 15KM from Kibuye town, Kopakaki Dutegure Cooperative is Located on the karongi hills touching the shores of the rift valley lake of Kivu in the Karongi district of the Western Province, this Coop enjoys the abundant rains and high altitude that produces a slowly matured bean that has a distinctive taste and aroma. Started in the early 2005 Kopakaki Dutegure was founded from two small coffee farmers associations of 630 members in total. Construction of their washing station started in December 2006 and saw their first harvest crop in the 2007. Fair-trade certified their first crop export is expected at 13.587MT of high quality fully washed green bean coffee. Their washing station has a capacity of processing up to 500MT of cherries in Ideal conditions and the farmers are planting more coffee to meet this capacity. Having joined Misozi in foundation this Coop has earned one of the best premium prices for its first crop harvest. Well balance in gender by membership Kopakaki enjoys steady and good relationship with newly established clientele.

Located just 20KM east of the capital Kigali, The Misozi recent born member offers a good cup profile desired by many. Born from same associations that started KPB MCAC started constructing their washing station late in the year 2006 and saw their first crop production in early May 2007 with a yield of 7.315MT fine exportable quality fully washed green bean coffee. Fair-trade certified MCAC Cooperative has a membership of 297 of small holder coffee farmers and boasts of producing up to 300MT given all Ideal conditions of producing good quality coffee. The farmers proudly talk of how the establishment of the Cooperative and the washing station has extended infrastructure for development like water ,electricity and a road. Having realised these farmers are now engaged in extra activities of production that include organising a cooperative canteen and a Tomato farm to maintain the welfare of their members when they are off the season. 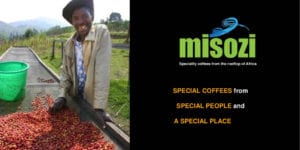 Members of the Month

Do you want to be the next Member of the Month?