By Joseph Burite in Kampala 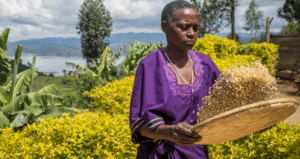 While the world keeps refilling its coffee cup Africa hasn’t kept up. Now farmers and policy-makers are focusing on this potential cash-crop dynamo with schemes to boost exports and strengthen processing capacity on the continent

The feeder route from the hard-surface road to Lake Nyabihoko in Uganda’s Western Region district of Ntungamo is unsparingly bumpy over several kilometers. Charles Barugahare has been operating commuter services here, in the form of a Japanese pick-up truck ferrying passengers to and from the area’s main trading centre, for 20 years. It is usually easy finding a spot to grab during the journey. But in days between May and August, passengers often have to compete with loads of coffee bags heading to mills for processing, a first stop on their path to international markets.

For a greater part of his life, the cargo in his truck was the closest association           Barugahare had with coffee, despite it being a common cash crop in the area. Recently though, seeking to diversify his income stream from cattle rearing and a liquor store and tempted by government planting supplies, the father-of-three planted four acres of robusta coffee. “These are the things l

eft for us to do now,” Barugahare says at his hilltop house overlooking a lake. “It’s not much. It’s just for a start,” he adds while gazing at his plantation.

In his small way, Barugahare is contributing to African countries’ plans to raise coffee production, which is on course to reach about 16 million 60kg bags this season. If more farmers turn to the crop, the continent could raise production by an estimated three million 60kg bags annually, industry officials estimate. Most of the continent’s production is by smallholder farmers rather than big industrial plantations.

To achieve that target, Africa’s two main producers, Ethiopia and Uganda, are focusing on abandoned coffee farms for rehabilitation. Farmers in Kenya are planting new varieties and expanding in new areas, especially towards the west, to reduce the risk of pests and diseases, explains Ishak Lukenge, chairman of the Africa Fine Coffees Association (AFCA). The Ugandan government is also fast-tracking new legislation that seeks to improve farm operations, organise farmers and improve quality so as to increase profit margins and access to market.

The success of initiatives aimed at increasing production will likely revive the continent’s medium- and long-term export prospects to match or even surpass levels attained in 1990, Lukenge says. With production that stagnated for more than 20 years, Africa’s share of global output decreased from 36.6% in 1990 to an estimated 10.8% in 2016. Its share of the total value of global coffee exports fell from 21% in 1990 to 9.4% in 2016. This took place as global demand increased by more than 50%, from 100 million bags to 159 million bags predicted for the year 2017/2018, according to the International Coffee Organization. In 2017/2018, output in Africa is expected to rise 3.2% to 17.66 million bags.

Still, Africa’s producers, which amount to around seven million households, are largely missing out on opportunities brought by global growth in demand that resulted from increased consumption in emerging economies, José Sette, ICO executive director told media in February.

Private-equity firm The Abraaj Group is betting big that there is untapped demand for coffee on the continent. It purchased Kenya’s Java House coffee chain last year and the company announced in May that it has major expansion plans on the continent.

As of 2016/2017, Africa’s coffee consumption stood at 11 million bags, with annual growth averaging 1.9% since 2013/2014, according to ICO data. Ethiopia, the largest African coffee consumer, drinks about half of the 7.65 million bags it produces. Sudan follows with 700,000 bags per annum, and South Africa rounds off the top three consumers at 500,000 bags. Nigeria, Africa’s second-largest economy, consumes all of its negligible production. With its large population, it is seen as a potential market that producers like Kenya are looking to tap. A growing youth market could mean Africa will soon be consuming 40 million bags of coffee a year, the AFCA’s Lukenge estimates.

Output targets have also been derailed in Tanzania by seasonal unpredicability, forcing the East African country to revise its strategic plan, says Primus Kimaryo, acting director general of Tanzania coffee board. Tanzania’s coffee production dropped to 780,000 bags in 2016/2017 from 1.03 million bags in 2015/2016. It is forecast to fall further to 716,000 bags in 2017/2018. This makes it very difficult for farmers to meet the government’s target of 1.6 million bags by 2021.

Structural limitations in some regions also constrain the sector. “Export processes, which include pricing, logistics, finance, risk management and transport, are a real challenge for East Africa,” says coffee trader Phil Schluter. “It’s the reason why coffee sometimes takes four-to-five months to leave the region and realistic shipping times are four-to-five months after harvest, whereas in Central America [they are] about half that or less,” he says.

Uganda’s farmers have their own obstacles. “The only disadvantage we have is the [price of] freight,” says the AFCA’s Lukenge. “We are landlocked. From Kampala to Mombasa costs about $110 per tonne. When you go to Ethiopia, from Addis to Djibouti, it is $30 per tonne. So we have that disadvantage of being away from the sea.”

An awful lot of coffee

Across the continent, smallholder farmers would benefit if governments rolled out more extension services and other policies that focused on all links in the production-to-export chain. Schluter says farmers like Barugahare stand to earn higher prices if they improve the post-harvest handling of beans. They could triple from an average of $0.91 per pound currently to $2.3-$3 per pound, Schluter argues. Schluter also sees potential for an 86% increase in African yields if proper varieties and agronomy are applied. Along with post-harvest processing, “this is where money should be spent by African producers,” he says.

Indeed, Uganda is starting to reap the benefits of such improvements. In 2013, the government deployed the army to conduct agricultural extension services, which saw soldiers offer improved coffee seedlings and agronomy advice. Production had long stagnated at 3.6 million bags and then the country increased output to 4.96 million bags in 2015/2016 and 5.1 million in 2016/2017. Policy-makers hope the country will lead the charge for a revival of Africa’s output, targeting a harvest of 20 million bags by 2030 – a surge that could spur the continent to levels closer to industry leaders Brazil and Vietnam.

But Brazil remains king and its expected record harvest this year is already causing jitters as prices are likely to fall. There are bound to be bumps in the road for African coffee growers who want a bigger stake in a highly competitive field against strong agricultural powerhouses. And falling prices will test those farmers’ commitment to coffee in the next few years.